The Transatlantic Trade and Investment Partnership is the widest known free trade agreement due to tenacious campaigns and focussed attention on it by activists, NGOs, campaigners, numerous bloggers, and the Green Party Group in the EU. In 2014 other trade agreements, such as CETA and TiSA all came to light due to this attention, illustrating the over-arching neo-liberal economic model being pushed underhandedly onto our countries. These trade agreements will bind all future governments into them. They are specifically aimed at de-regulation giving corporations powers that no government will be able to challenge under any legal framework. This is why they are a threat to our democracy. Multi-national corporations are very powerful particularly when they work together. 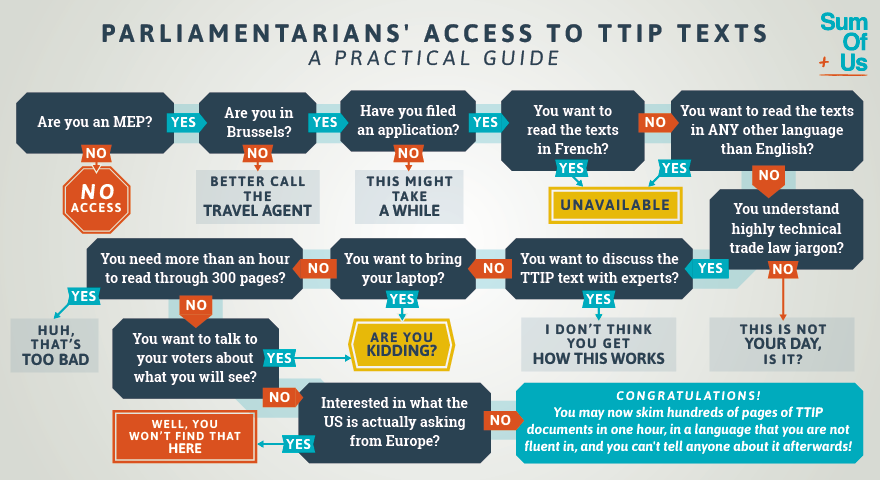 The negotiations of TTIP are being done under unprecedented secrecy within the EU Commission. This graphic shows the path one must take to view the complicated text which requires an in-depth knowledge of corporate law to comprehend. Due process within EU law involves MEPs voting on the proposed TTIP. Its a long process and the more we fight it, the more unlikely it is to be passed.

The Investment State Dispute Settlement (ISDS) provision, which is the arbitraty legal proceedings agreed upon within many FTAs, should there be a dispute between a national government and a foreign investor (usually a multinational corporation), is of particular concern. Disputes involving ISDS currently include Vattenfall vs Germany for €4.7 Billion, because Germany is phasing out nuclear power and the Vattenfall Energy Company is eligible under ISDS to sue for all ‘future profits”. Most ‘disputes’ are likely to follow the pattern of  Profit vs People and as we all know, governments do not have billions to spare.

In a nutshell ISDS violates two key principles of the rule of law:

The arbitrators are not judges with a fixed salary, they are private lawyers paid per case, per day which creates a conflict of interest in and of itself . These lawyers may very well have worked for the foreign investors in the past and may very well work for them again in the future.

Why should we trust this?

How Investment Arbitration is Undermining the Rule of Law

There is nothing simple about this battle. The corporations and their lobbyists are powerful, extremely wealthy and well versed in corporate law! We have to do all we can to stay informed of this ever changing landscape and fight it on all fronts.

There are many things you can do to stay informed and to inform:

The battle against TTIP continues. The debate is not in the mainstream media and may never be in the manner that it should be so raising public awareness is hugely important and all our job to do it.  (Shame on you BBC)

The details are out on the the Trans-Pacific Partnership, and critics say the trade deal is worse than they feared. The TPP’s full text was released Thursday, weeks after the United States and 11 other Pacific Rim nations—a group representing 40 percent of the world’s economy—reached an agreement. Activists around the world have opposed the TPP, warning it will benefit corporations at the expense of health, the environment, free speech and labor rights. Congress now has 90 days to review the TPP before President Obama can ask for an up-or-down vote. In this video Lori Wallach, director of Public Citizen’s Global Trade Watch and a leading TPP critic talks to the on-line news US based news network Democracy Now.

No TTIP is supported by a broad coalition of groups

Friends of the Earth, England, Wales and Northern Ireland

Power for the People

Young Friends of the Earth